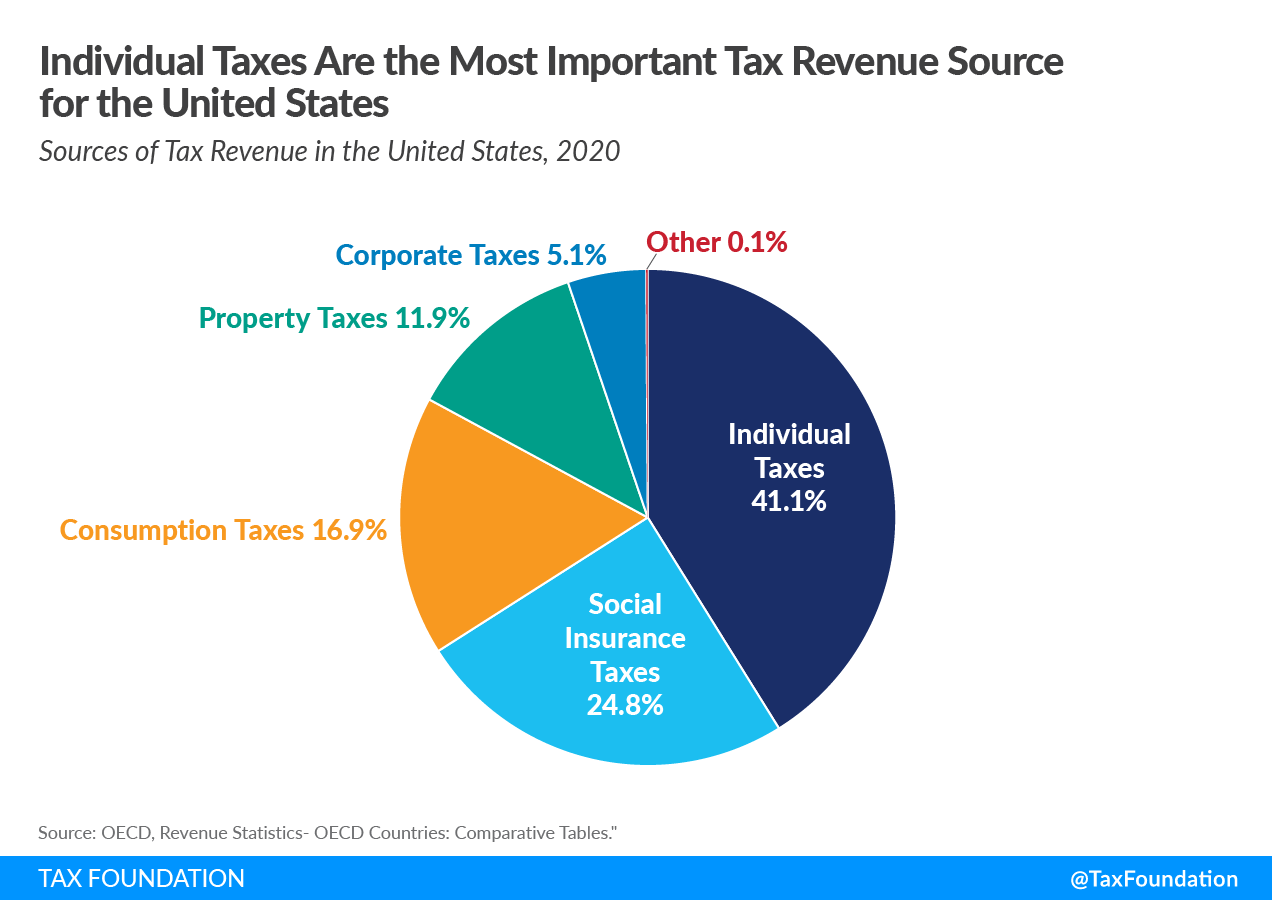 Policy and economic differences among OECD countries have created variances in how they raise tax revenue, with the United States deviating substantially from the OECD average on some sources of revenue.

Different taxes create different economic impacts, so policymakers should always consider how tax revenue is raised and not just how much is raised. This is especially important as the economic recovery from the pandemic continues.

In the United States, individual income taxes (federal, state, and local) were the primary source of tax revenue in 2020, at 41.1 percent of total tax revenue. Social insurance taxes (including payroll taxes for Social Security and Medicare) made up the second-largest share, at 24.8 percent, followed by consumption taxes, at 16.9 percent, and property taxes, at 11.9 percent. Corporate income taxes accounted for 5.1 percent of total tax revenue in 2020, the third year after passage of the Tax Cuts and Jobs Act, and just 0.6 percentage points less than in 2017.

The OECD on average raised 5.6 percent of total tax revenue from property taxes, compared to 11.9 percent in the United States.

The United States relies much less on consumption taxes than other OECD countries. Taxes on goods and services accounted for only 16.9 percent of total tax revenue in the United States, compared to 32.1 percent in the OECD.

This is because all OECD countries, except the United States, levy value-added taxes (VAT) usually at relatively high rates. State and local sales tax rates in the United States are relatively low by comparison, but they are on a different tax base. 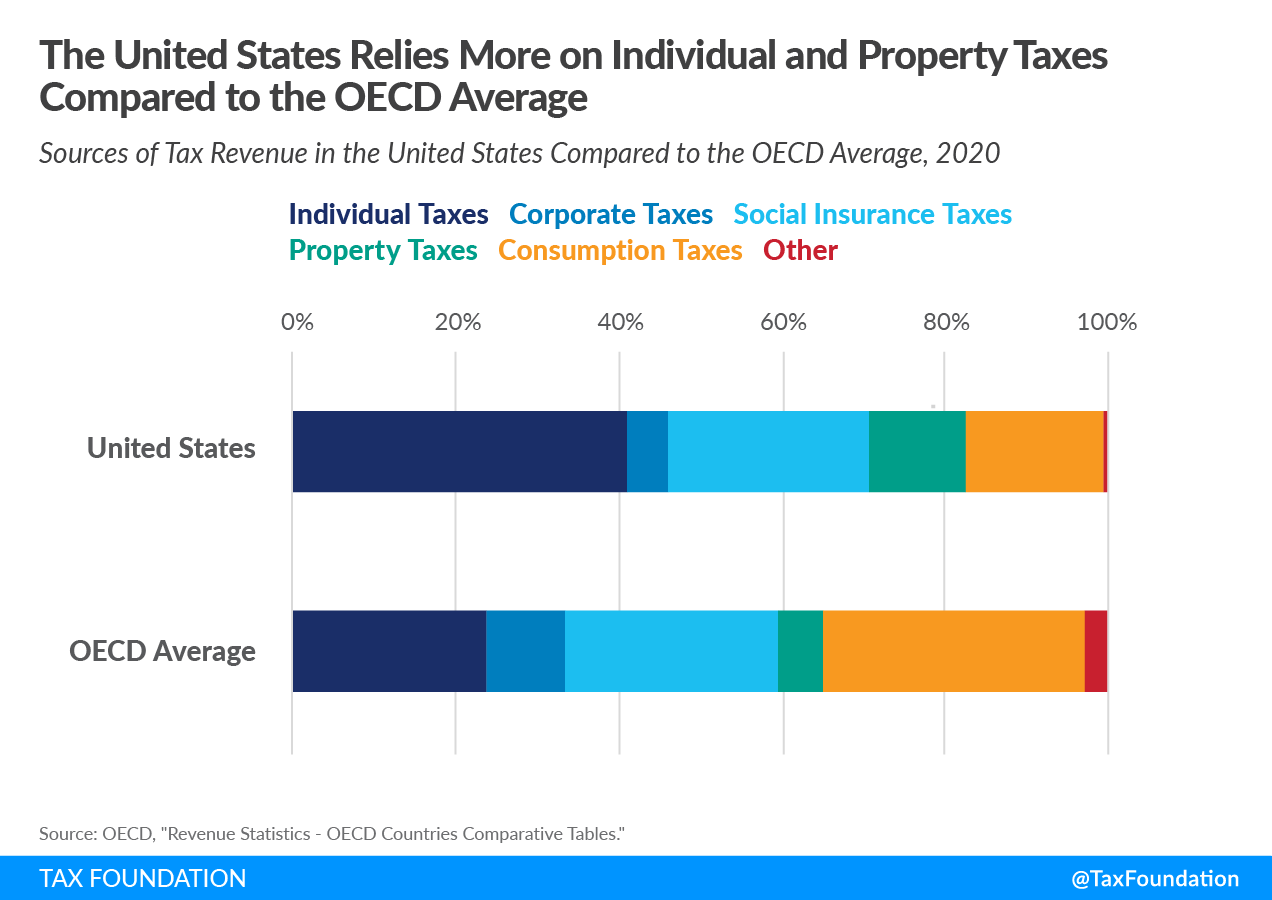 Countries also have different levels of governments at which taxes are collected. The United States along with nine other OECD countries have a decentralized political structure where state or regional governments play an important role in the tax collection.

Nearly half of tax revenues in the United States is raised at the state and local levels.

Every country’s mix of taxes is different, depending on factors such as its economic situation and policy goals. However, each type of tax impacts the economy in a different way, with some taxes being more adverse than others.

Generally, consumption-based taxes are a more efficient source of revenue because they create less economic damage and distortionary effects than taxes on income. As the U.S. economy recovers from the pandemic, tax revenues are also recovering. Policymakers should be cautious to avoid enacting tax increases that will be harmful to the recovery or place unnecessary burdens on U.S. workers and businesses. 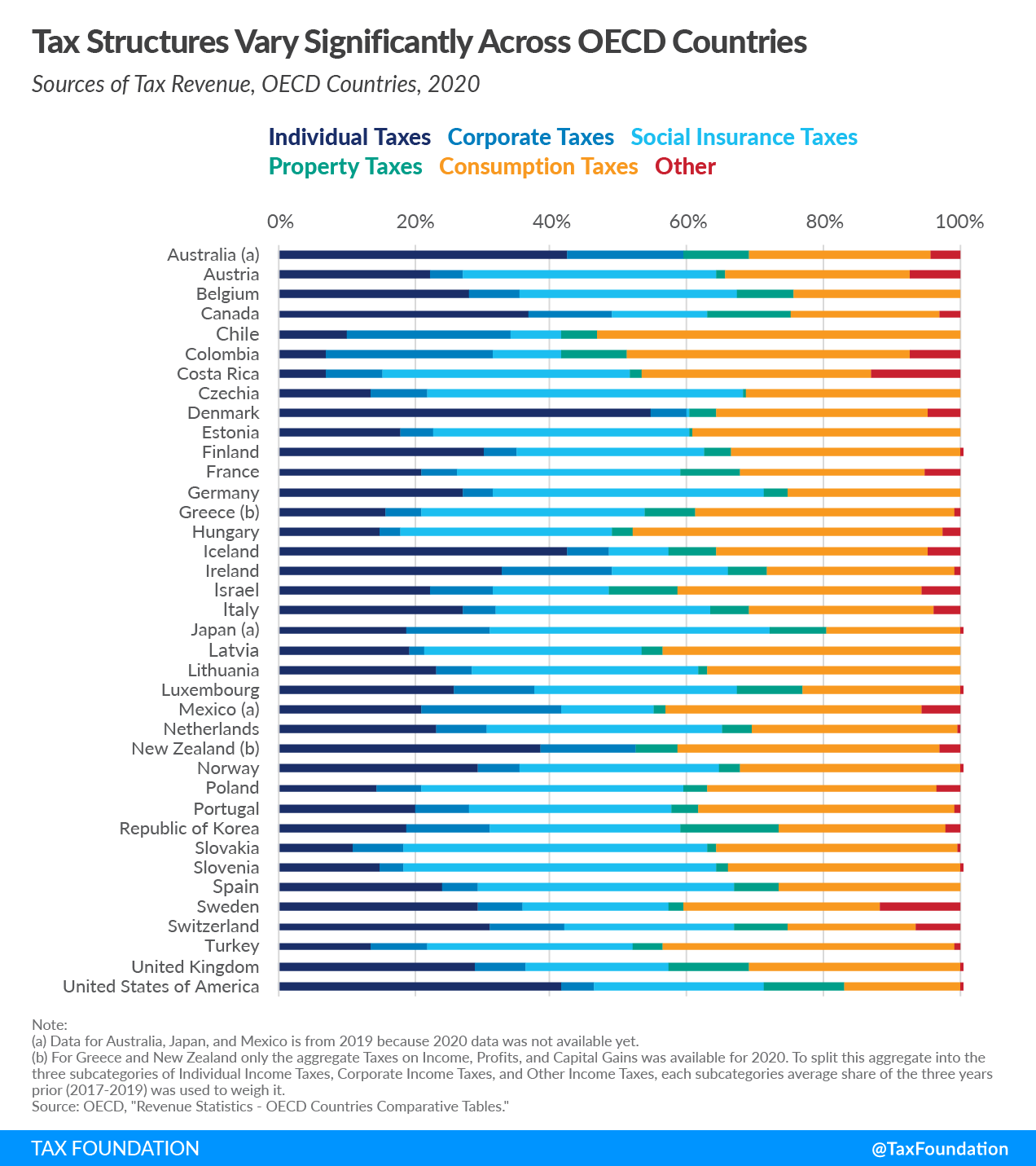